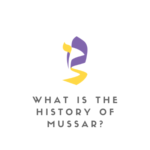 The study of Mussar began in tenth-century Babylonia when Sa’adia Ga’on published his Book of Beliefs and Opinions and launched an inquiry into human nature that has been going on in the Jewish world ever since.

Before the nineteenth century, Mussar was an introspective, solitary practice. However, in the mid-1800s Rabbi Yisrael Salanter called on the Jewish people to learn and practice Mussar as a means to strengthen their hearts. His disciple, Rabbi Simcha Zissel Ziv, later founded a yeshiva in Lithuania which became the seat of the Kelm stream of Mussar. Two other disciples, Rabbi Noson Tzvi Finkel of Slabodka and Rabbi Yoseph Yozel Hurwitz of Novarodok also founded yeshivas and articulated their own versions of Mussar teaching. Contemporary Mussar teachers draw on all three schools to inform their teaching.

Many of the Jews involved in the Mussar movement were killed in the Holocaust, and scholars, like Hillel Goldberg, wrote that it was only before World War II that Musar was “still a living community.”

Following the war, some students of the Mussar movement settled in Israel and established Mussar yeshivas there. Those who settled in the United States established few institutions dedicated to Mussar but some yeshivas continue to give time to Mussar study each week.

At the start of the 21st century, a significant revival of interest in the Mussar movement has occurred in North America in various sectors of the Jewish world.

Within the Orthodox community, the AishDas Society, founded by Rabbi Micha Berger, and the Salant Foundation, founded by Rabbi Zvi Miller, began to organize Musar groups, classes, and other teaching events. Avi Fertig, now the Director of Mussar at The Mussar Institute, an Orthodox rabbi published books to teach Mussar from an Orthodox perspective.

In 2004, The Mussar Institute, was founded by Alan Morinis to spread the practice of Mussar in a non-Orthodox framework. Morinis’ book, Everyday Holiness (2007) and Ira Stone’s book A Responsible Life (2007) have been among the popular books which sparked contemporary interest in the Musar movement.

Musar has been described as “an emerging and growing phenomenon” within Reform Judaism, and leaders of Conservative Judaism have debated whether Musar should stand at the center of its approach.